Today we woke up an hour earlier then usual because we had an hour long drive to the Palace of Versailles. After waiting 10 minutes in the 6 degree cold we got to see some very beautiful artwork painted on the walls of rooms that were previously owned by kings and queens. We were given a run down on the history of the palace by our very smart tour guide Cecile. The palace itself was surrounded by beautiful detailed golden gates and the gardens outside the palace were very gorgeous and green.

After the palace we made our way to the Musée d'Orsay. In the museum we saw many well known artworks by famous artists. The museum consisted of both statues and art on canvas. My personal favourite was an artwork called La Niege by Charles-François Daubigny. After the museum we made our way back to the hotel where we celebrated Natasha's birthday with some cake! 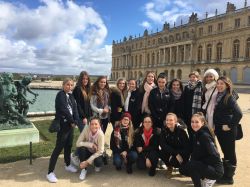 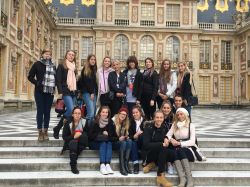