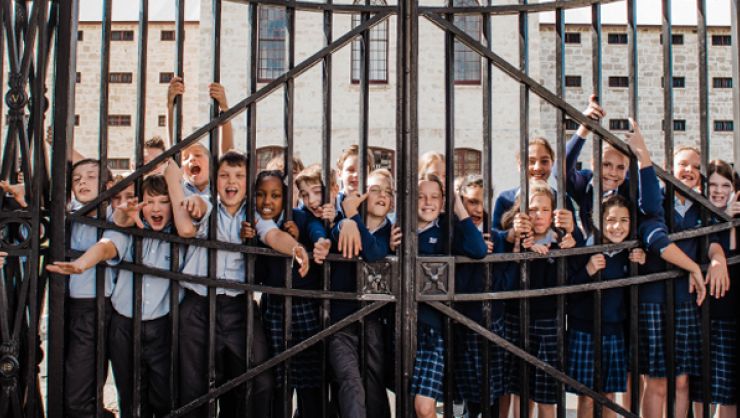 The Year 5 students learned a lot and had a lot of fun on a recent excursion to Fremantle prison.

The students visited Fremantle Prison for a tour of the grounds, saw the cells of the convicts they learned about during the term and found out more about life in the prison. After seeing the prison, students and staff visited The Round House where one of the students had the opportunity to shoot the cannon! Throughout the day, students learned a lot about our local history and had a lot of fun (including when Miss Bruce was put in the stocks).

Here are some student comments about their favourite part of the excursion:

“The Fremantle Prison excursion was fantastic and I think all my fellow classmates enjoyed seeing some very interesting places inside and even some spooky ones! It was difficult to pick my favourite place because all of them had such diverse and fascinating information. My favourite part of the excursion was learning about solitary confinement.  Solitary confinement is where the likely to escape convicts were locked up in a very small, tight and sealed cell with no windows or light. The cell was solid concrete with two metal doors to prevent the convict from escaping. This must have driven the convicts insane (no wonder the convicts were so weird). If you have the chance to visit Fremantle Prison I would totally recommend it and you will be amazed.”  - Maan Dhammu

“Fremantle Prison was a good experience for us kids with lots of surprises around every corner -  like a church in a prison - Who knew?! The thing that I thought was most interesting about this excursion was how some of the greatest escapes and escapees of all time were in that very prison, like Moondyne Joe, who escaped 6 or 7 times! This was my favourite thing because it was really interesting to hear about all the escapes during the time that Fremantle Prison was open. So, I really recommend going on the tour in all the cells, especially Moondyne Joe’s.  It was pitch black! I loved the trip and I would highly recommend going if you ever have the opportunity.” - Cameron Grosse

“Fremantle Prison was amazing! It was so huge that it was starting to become creepy. We went off in our classes to different areas. We got to see many places inside it. These included the cells of Moondyne Joe and James Walsh. They were only two of the most famous prisoners. We even had the chance to be locked up in solitary confinement, but only for a little while. Over all, everyone had lots of fun.” - Christina Moulds

“Fremantle prison was the best excursion I've ever been to because of the famous prisoners’ cells we looked in and the places we went in. Back then, when they had tennis courts there, someone threw a tennis racket up on top of a wall and it is still there! Fremantle Prison was the best.” -  Cooper Bullard