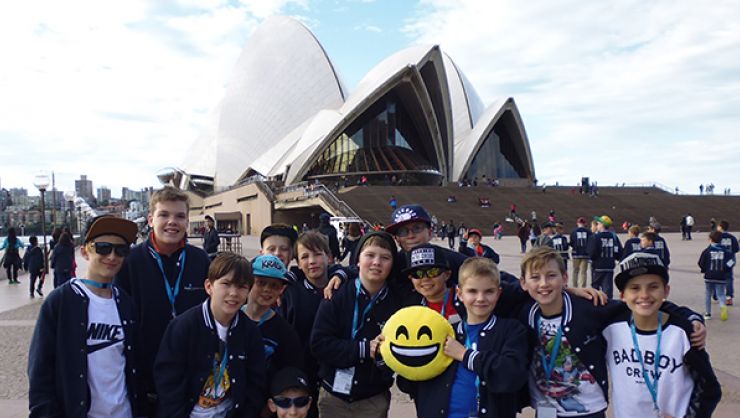 Students from our College recently undertook an educational tour of our national capital.

Students were given the opportunity to participate in a variety of educational programs with a focus on Australia’s history, culture, heritage and democracy. The Australian Government recognises the importance of all young Australians being able to visit the national capital as part of their Civics and Citizenship education. To assist families in meeting the cost of the excursion the Australian Government is contributed funding of $240 per student under the Parliament and Civics Education Rebate program towards those costs. The rebate is paid directly to the College upon completion of the excursion.

Day 1 – Thursday
Joshua L: The first day of the 2016 Sydney/Canberra trip was so much fun. We left Perth at 5:30 in the morning for a three hour flight. We went to Bondi Beach where we had lunch. We had a look at the Sydney Opera House, which was huge, after that we went to the lookout pylons and the Sydney Harbour Bridge which was 89 metres in the air!

Day 3 – Saturday
Ryan A: Today we went to Bathurst. On the way, we went to Mount Panorama Racetrack and then arrived at the Bathurst Goldfields where we went gold panning and most of us found gold. Tonight a man told us stories and we did some dancing.

Day 6 – Tuesday
Oscar C: Today we went to the War Memorial to discover about war and to thank the people who served and protected us. When we got there we went to the discovery zone, which was where we could experience what it is like to be in the trenches, in a submarine and to fly a helicopter. After that we went to these rooms showing models, dioramas, real life helicopters, jeeps, tanks and planes. At about 5:00pm we went to an ANZAC ceremony to remember those who fought for us to keep world peace and who made Australia, Australia. It was very exciting because I got the job of carrying a wreath to the Lake of Reflection, which has the internal flame. I liked the bag pipes sound because that’s Scottish where lots of my family is from. Overall the whole day was very exciting and educational.

Day 7 - Wednesday
Sabryn C: Today we jumped on the bus ready for a day in the snow. The bus ride was about 1 ½ hours long but it was worth it. Once we had arrived we got off the bus and had some lunch and a nice snack. After eating we went to the mountains that had snow on them. We rode toboggan’s and had snowball fights it was so much fun. Once the snow time had finished we got on the bus and went to McDonalds.

If you would like to see further photos and read about the trip please follow the link below.
https://sccsydneycanberra2016.wordpress.com/