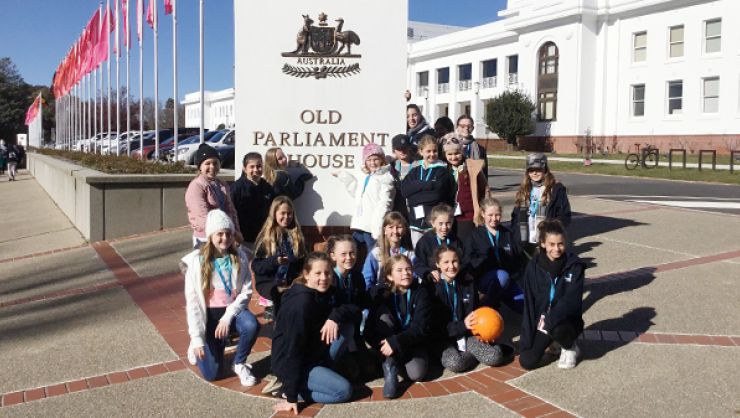 The College’s Year 6 students recently went on an educational tour of our national capital.

Students were given the opportunity to participate in a variety of educational programs with a focus on Australia’s history, culture, heritage and democracy.

The Australian Government recognises the importance of all young Australians being able to visit the national capital as part of their Civics and Citizenship education. To assist families in meeting the cost of the excursion, the Australian Government is contributing funding of $260 per student under the Parliament and Civics Education Rebate program towards those costs. The rebate is paid directly to the school upon completion of the excursion.

On the way to Canberra, students also visited Sydney, the Bathurst Goldfields and the Australian Institute of Sports. They spent some time enjoying the snow in the Snowy Mountains and took part in a memorial ceremony at the Australian War Memorial.

The students have put together their personal recollections and highlights of the trip:

“Today was the first day of the Sydney and Canberra trip. In the morning, we all had to get up very early to make it to the airport by 4:00am. Once we had landed in Sydney and made it out of the airport, we headed for Bondi Beach. We took some amazing photos and stopped for lunch. The Harbour Bridge was amazing and the Sydney Opera House was a sight worth seeing. Overall, I think day one was pretty amazing!“ - Levi H

Day 2 – Saturday
“Today we went to Taronga Zoo, it was so much fun! We got to see a seal show with three to four seals doing awesome tricks. We ate lunch at First Fleet Park and went to the aquarium where we got to see many sea creatures. My group and one of the boys’ groups went around the aquarium about 10 times. The seal show was my favourite part of today; it was so fun.” - Rachel T

Day 3 – Sunday
“Today we went to Bathurst Goldfields to see what being a miner for gold felt like.
Then we went to see all of the steam machines and saw how they used to cut up the rock to find the gold. The thing I enjoyed the most, was helping the blacksmith make a metal poker and hook. I got to pump the bellows.” - Rhys H

Day 6 – Wednesday
“Today we went to the snow. It was really cool because we went tobogganing down the hill really fast. I liked making snowballs and having snowball fights with my friends. My favourite thing that we did today was DEFINITELY tobogganing!” - Sienna M

Day 7 - Thursday -
“Today I found out a lot about my grandfather who fought for my freedom to live in this country. I never knew that he was a prisoner of war. It made me feel pretty happy that he fought for my freedom, but it was a little upsetting that he had to go to war and that he was a prisoner of war. I think he was pretty brave.” - Jackson C

“Today we went to Parliament House where we did a role play for the Senate. The bill was ‘Should animals be banned from the circus’. The bill passed, but we made some changes to it, so that if it was real, it would have to go back to the House of Representatives and then it would go to the Governor General to sign off the bill. Then we went to the War Memorial. First, we had a quick tour and got shown some of the weapons, clothes and conditions the soldiers had to put up with during times of war. After that, we went to the discovery zone and we got to sit in a helicopter as if we were actually flying it. Then we went to the submarine and got to try on uniforms and smell what it would have been like back then in a cramped space. We got ready for the memorial service to pay our respects to the soldiers that gave their lives for our country’s freedom.” - Maggie R

If you would like to read more about the trip please follow the link below.  At the end of each day, there is a link for more photos.
https://sccsydneycanberra2017.blog/