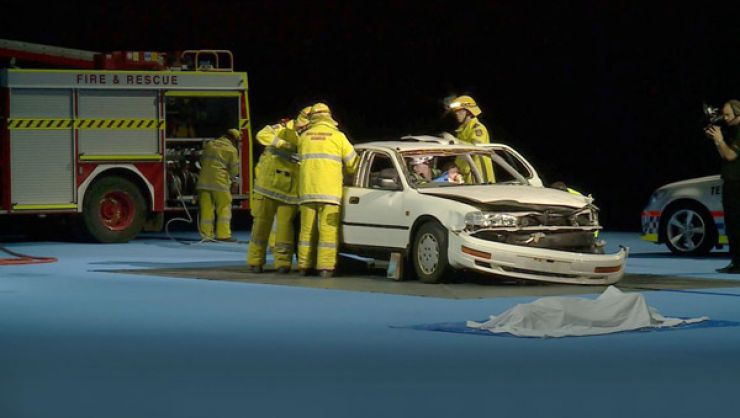 The scene was staged as part of the RAC bstreetsmart youth road safety event and demonstrated the far-reaching impact of road trauma. RAC bstreetsmart is a key part of RAC’s youth road safety education strategy and has been held each year since 2012, with Swan Christian College attending each year since 2016. It is presented by the RAC, WA Police, the Department of Fire and Emergency Services, St John Ambulance and Royal Perth Hospital.

As well as the simulated crash scene, Swan students in Year 10 heard stories from those who had been personally impacted by road trauma along with emergency services personnel. The crash simulation provided an insight into the enormous number of people who must deal with the aftermath of a serious road crash – a scene we hope none of the students attending will ever have to witness in real life.

During the lunchbreak the students were able to leave their seats and head down on to the main floor of Perth Arena, where they were able to speak with the various emergency services personnel. They were also able to look inside the different emergency vehicles and see what sort of equipment is carried in these vehicles to assist with dealing with road crash situations.

After the event the feedback from the students was very positive, with most agreeing the day had been educational and worthwhile. The excursion also tied in very well with what the students had been learning about in their Health classes, both pre and post-event.