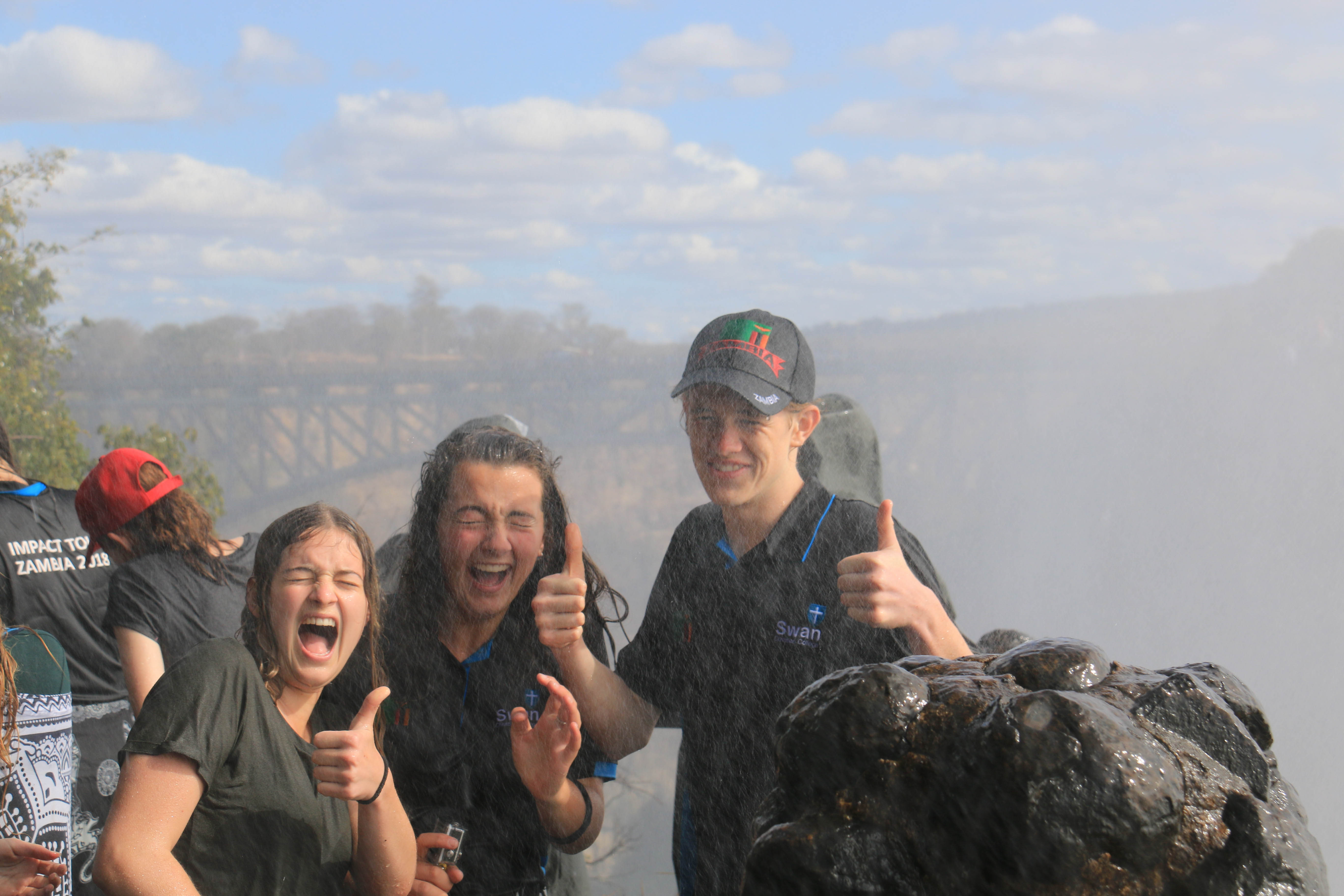 Both Shannon’s snoring and the loud African music from some building somewhere woke us up in the early hours of the morning. A late sleep-in compared to the last couple of mornings was beneficial to everyone especially the ones that were feeling under the weather.

We went downstairs for a pretty chilled out breakfast with a vast array of African equivalents which included some fake weetbix, strawberry yoghurt, cornflakes, peanut butter with toast and strawberry muesli. After breakfast we left for Livingstone Museum and the local markets. The museum provided great entertainment with the stuffed animals in the exhibits and the history of Livingstone.

Next, we went to the markets and for me (Shannon) it was an experience of learning how to barter. The number of items we collected increased along with the size of the holes in our pockets and shortly after beginning we were whisked away to lunch at the Hungry Lion. The Hungry Lion was a bit disappointing with the long wait for food and the raw chicken we were served, but our stomachs’ were filled so we were happy especially because we were now going to Victoria Falls.

The first glimpse of the falls was spectacular and the views of the picturesque landscape amazed us. We began walking down the path that surrounded the falls, unaware of just how wet we were going to get, even though we were told we would get drenched. Standing next to the falls, it felt like standing in heavy rain, it pelted down so hard that we often had to shield our eyes, and we wished we brought goggles to wear. We were freezing cold and wet and extremely jealous of the people wearing ponchos. The rain allowed us to once again for the second time on the trip bless the rains down in Africa.

After our walk around the top of the falls we began our descent down the path to the boiling point which had lots of baboons running through the bush along the sides of the paths. Samara had a close encounter with one of the baboons which grabbed her shirt, although she was fine and it did not harm her. The walk down was rocky and steep, a level of agility that most of us didn’t have was required when navigating the tough path. Even though the walk down was hard and the baboons were scary for some, the view from the bottom was worth it.

We sat down there for a while, admiring the view and watching people bungee jump from the bridge above. Some of us collected rocks to keep as souvenirs, some were bigger than others. When we were finished we began the treacherous and physically exhausting workout up to the top where we stopped to finally catch our breath.

We had another opportunity to barter at the Victoria Falls markets. We walked around freezing cold while people tried to trade with us for our wet socks, shirts and jackets. The markets were intimidating because the shop owners were pressuring us to buy unnecessary items and come into their shop. We left the markets with even more souvenirs and gifts for us to bring home to our families. When we got back to Fawlty Towers everyone rushed to the showers after being cold for most of the afternoon to finally warm ourselves up. We then had plenty of time to relax before we went out for dinner later that night.

The menu was interesting with many weird foods such as crocodile, impala, goat and nshima. Both of us chose the BBQ crocodile pizza to share, while others chose share platters, burgers, other pizzas and crocodile ribs. The food was surprisingly enjoyable and we all left with full bellies once again. We chilled out for a couple of hours back at the accommodation with a game of twister and some yoga before heading off to bed, tired from our exciting day.

By Shannon and Chelsea 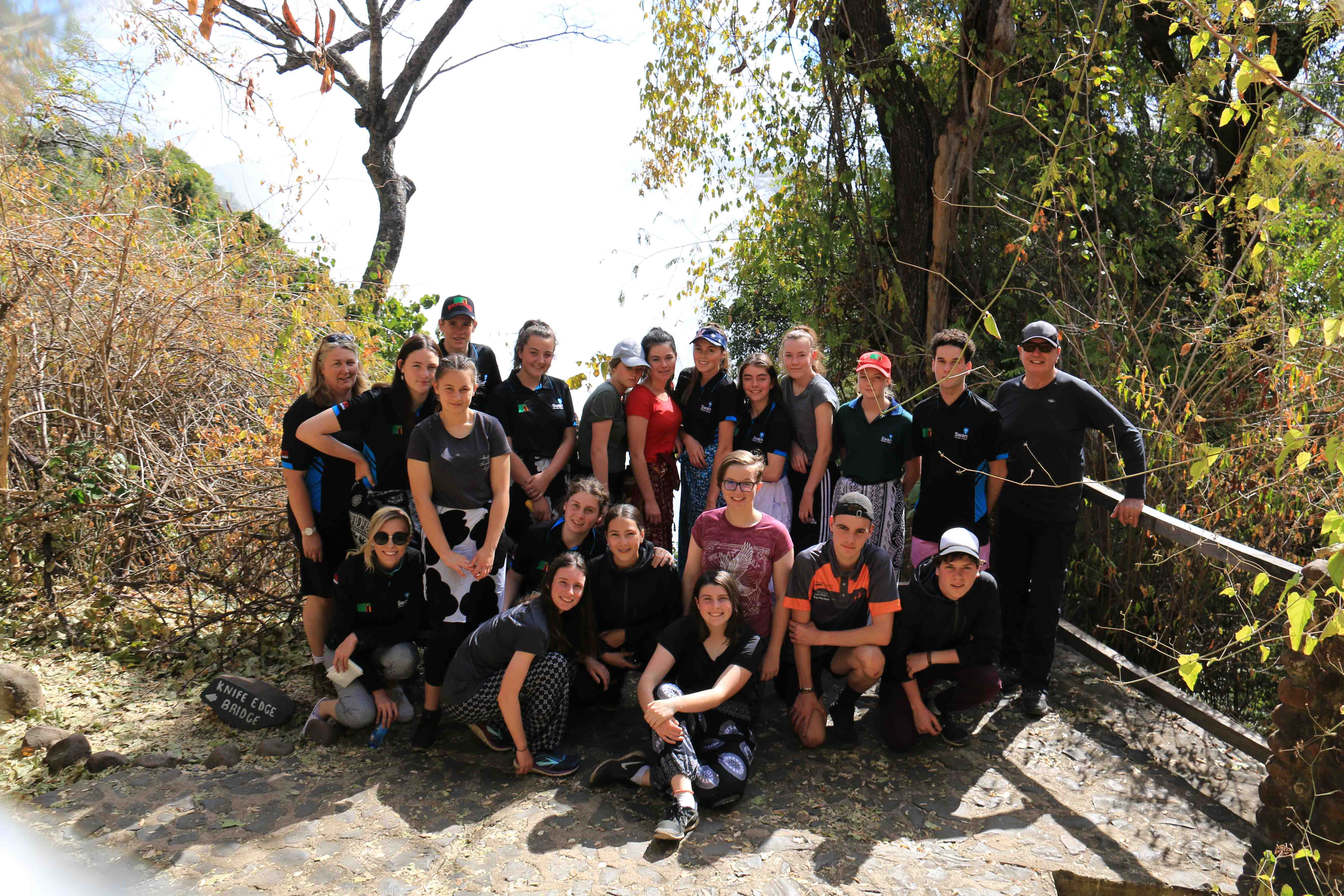 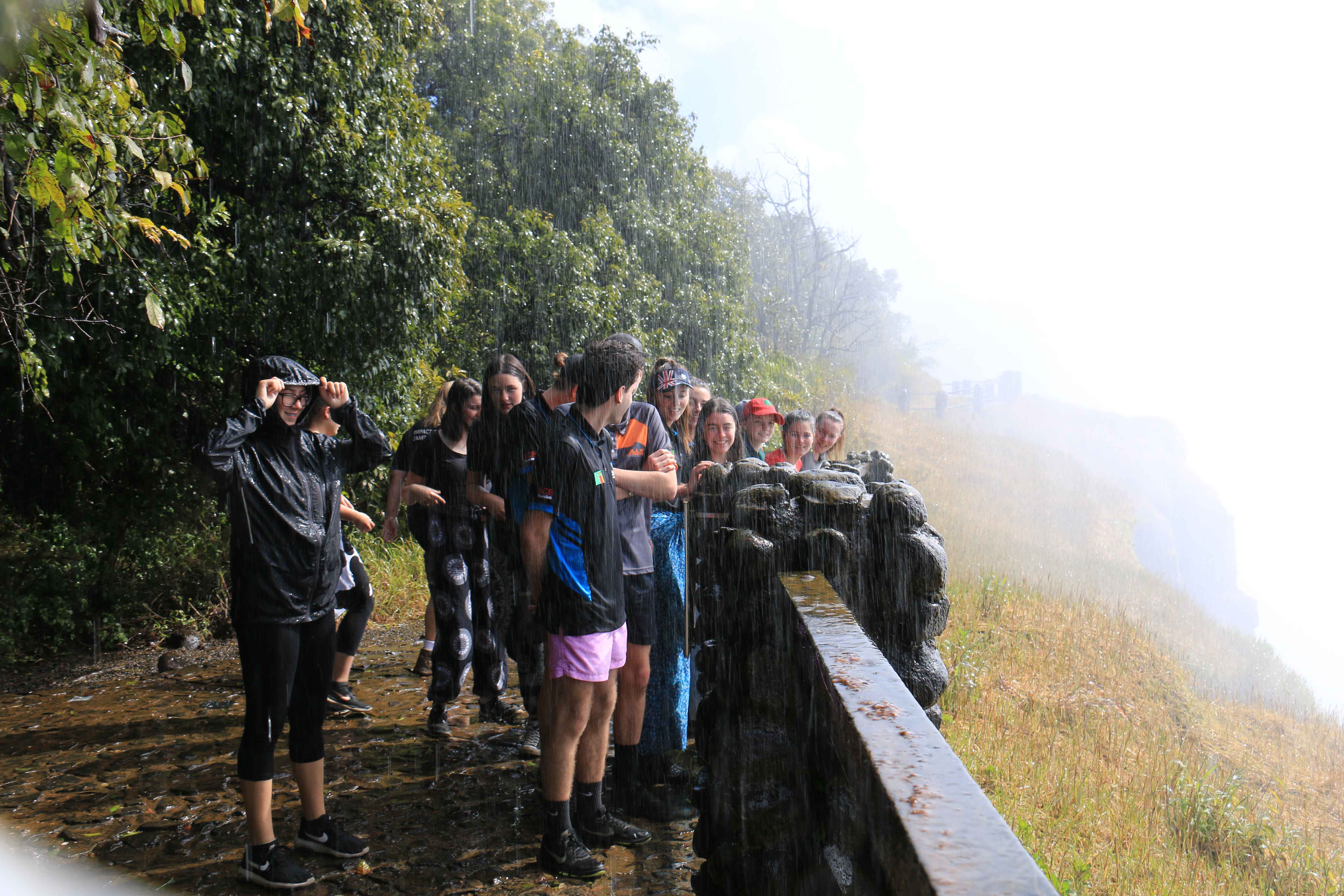 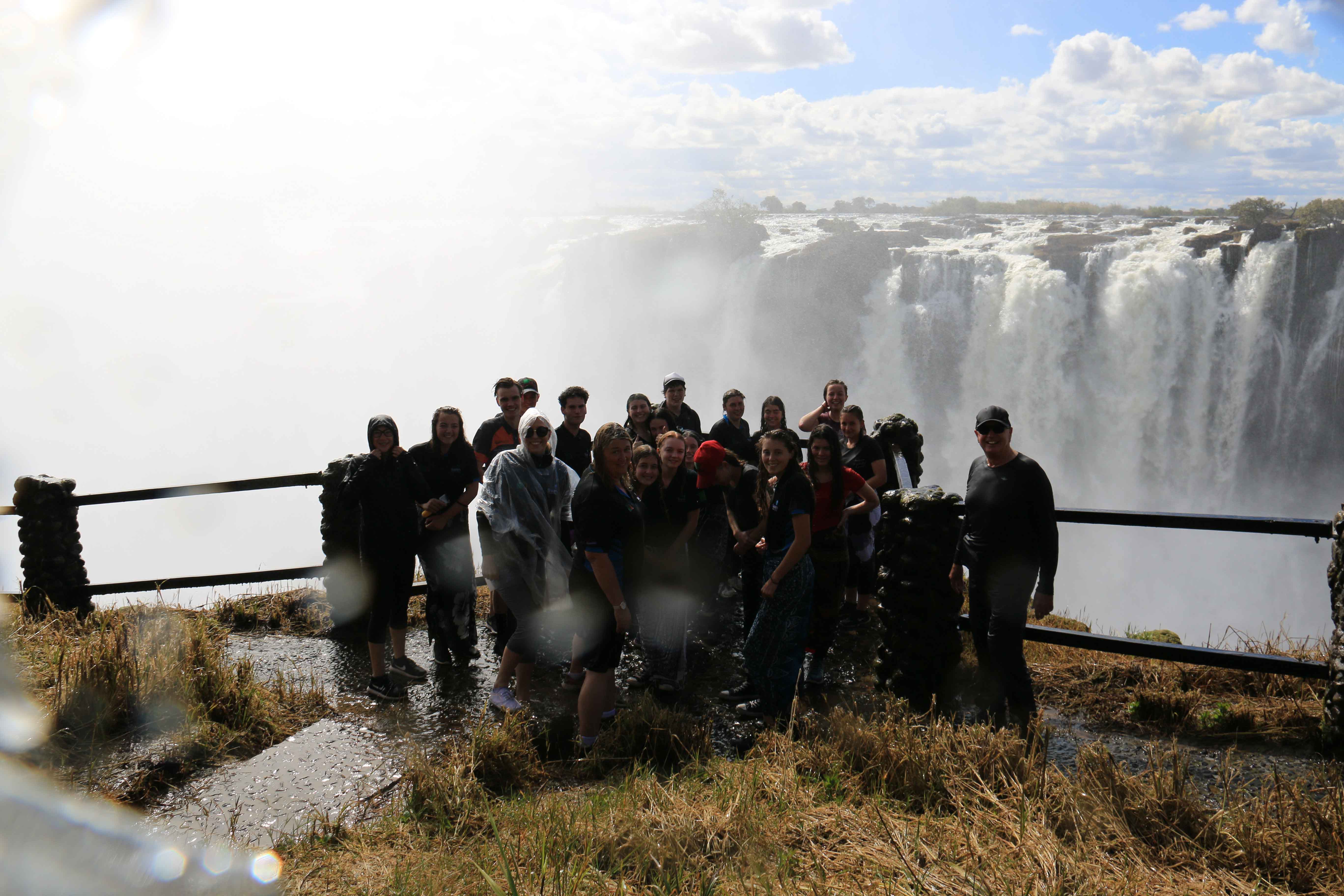 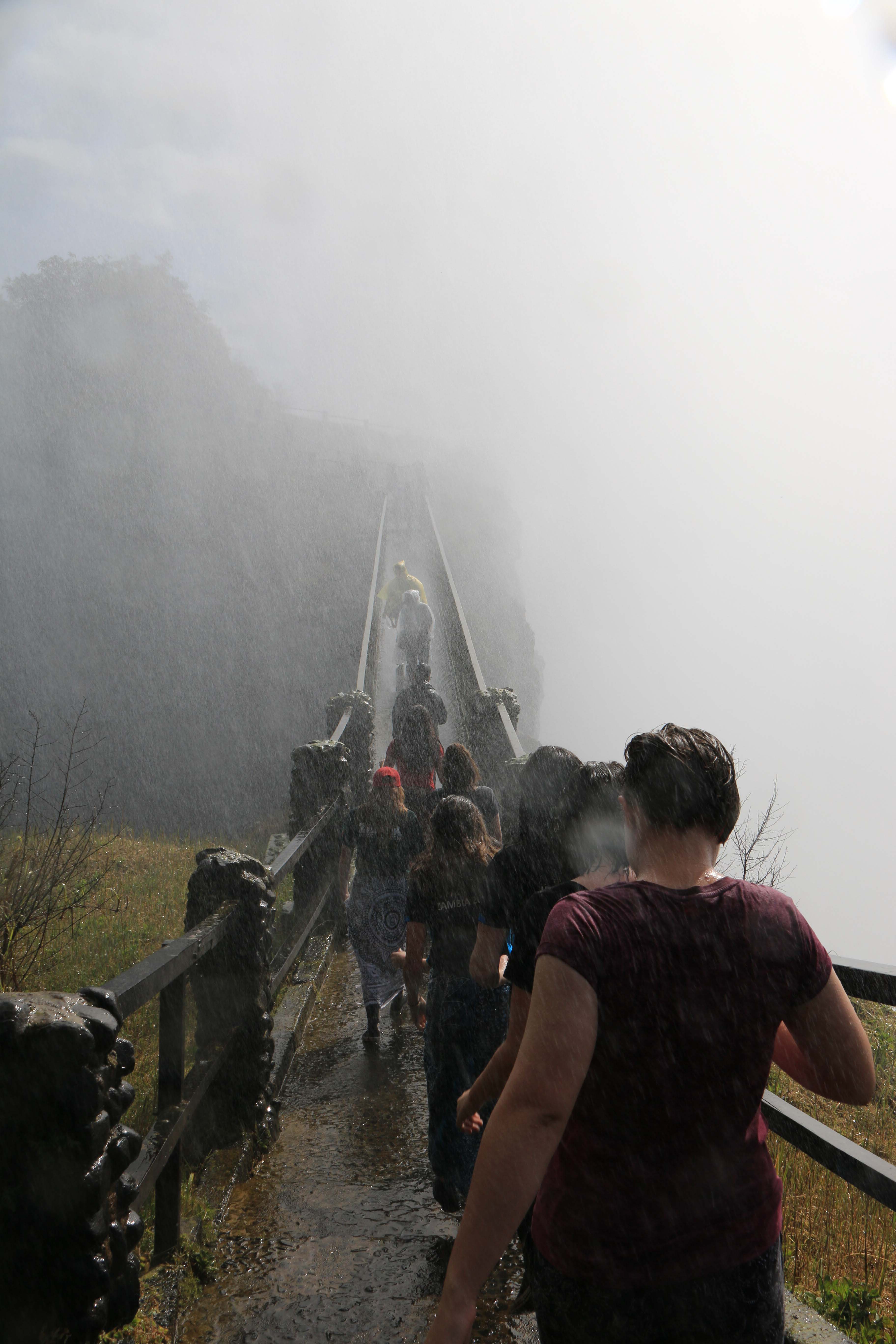