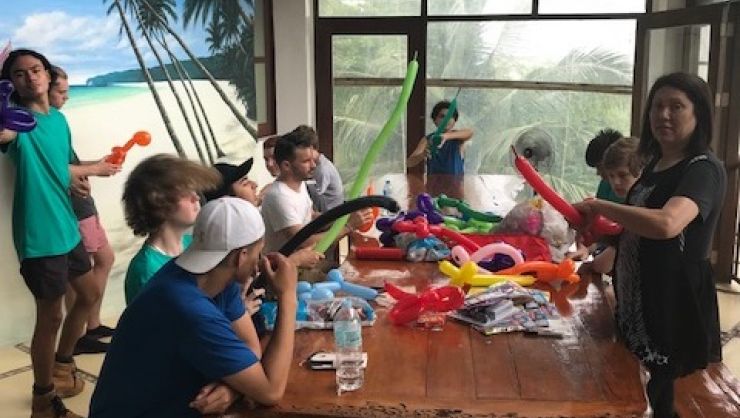 What a day! It’s just Day 1 of our work days and we are absolutely knackered. Groups 1 and 3 started on the work projects with electrical guys installing six fans around the gym, the carpenters putting together a gazebo and a couple of picnic chairs, and the metal fabricators making some windows for the class rooms.
All of us were looking tired and ready for bed by around 3pm. Group 2 were teaching the kids some maths but the kids also taught the guys some of their language, which I’m assuming was making a strong bond between us and the kids. We also handed out some bags with toys and t-shirts and saw the massive smiles on their faces which brought a smile to my face. What a day!
- Shona Charles
Today we went to the Ati School. We got projects to work on. I, Reece Bassett, electro student, was assigned to do metal fabrication work that involved making windows. I was fascinated by how fun it was. I was introduced to the angle grinder. Mr Blattmann showed me how it works and it was simple to use. When I had to cut metal to a certain length, I had the complete hang of it.

I used a drop saw that has a cutting disc, like the ones used in an angle grinder, but bigger. I had to use it to cut metal parts for a window frame. Some mistakes were made when I had to cut the frames at a 45 degrees angle. Both sides had to be cut opposite to each other so that it connects with other parts of the frame to form a square shape. I had also been helping the other metal fabrication students with the window frame and they were happy with the amount of help I gave them.

I went to the Ati School’s assembly area with the other students to watch the kids accept the gifts that they received. They were so happy, it was heartwarming to see the smiles on their faces. I also had been playing with a kid who latched onto me and I brought him to the basketball court and threw a few shots. It was a fun day and I really enjoyed myself.