Fenceline Theatre Company is Swan Christian College's school-based theatre that operates under the premise of creating ‘space for students to create’. The theatre company under the leadership of Jane Hille provides students and alumni with the opportunity to gain professional theatre experience.

With more twists than a roller coaster, this fractured fairy tale adventure tells the story of Little Red Riding Hood and her (less well-known) two sisters: Big Green Riding Hood and Medium Purple Riding Hood.
There are not one, not two, but three handsome princes in this play!
Get your tickets at http://scea.me/wwwh2021

If you would like to stay up to date with what's happening at Fenceline Theatre Company and would like to receive our next newsletter via email, please contact Jane Hille at fenceline@scea.wa.edu.au.

Fenceline Theatre Company and the Swan Performing Arts Department presented HONK! Jr, a heartwarming musical that showcased the talents of our Year 7 – 10 students. Based on an adaptation of The Ugly Duckling, HONK! is witty and hilarious, but also deeply moving. The musical takes us through Ugly’s journey of self-discovery as they meet lots of interesting characters, all whilst they unknowingly outwit a very hungry Cat! Ugly learns that being different is not a bad thing to be. This performance proudly showcased the talents of our best dancers, singers and actors. Directed by Mr Andrew Matthews, musically directed by Mr Andrew Raymond, produced by Ms Jane Hille and choreographed by Mrs Beth Balla, HONK! Jr. was a family-friendly fun night.

It is a beautiful story about older people. People who have fallen in love, married and then lost that love, through a mismatch, illness or death. But loss, as it turns out, is the great life leveller. We all experience it and through pain, we learn about the choices life has for us. Some try to bounce back to whom they thought they were, some choose to close the door on life, shutting it out completely, while others still fight on for a chance to be finally seen and heard.

Twice is an intimate exploration into loneliness, separation, and forgiveness. It deals with themes of love, age and dementia, and the secrets we keep from one another. This play is a familiar story about our interconnectedness and longing for a chance to renew, to be loved and to find peace.

The play looks at the pain and struggle of rapidly progressive dementia for the sufferers and those that are closely associated with them.

Charley’s Aunt is a hilarious farce about two young men trying to propose to two young women! However without a chaperone to assist them these men are destined to have their hopes dashed.

Until their friend Fancourt Babberly (yes that is his real name) discloses that he is in a local theatrical play and would like their opinion on his costume. Charley and his friend Jack have a ‘light bulb moment’ and coerce Babbs to play Charley’s millionaire aunt from Brazil, so they can win the hand of their beloveds.

Mistaken identity and the hot pursuit of unrequited love. 13 Senior School students were involved in this Fenceline Theatre Company production. 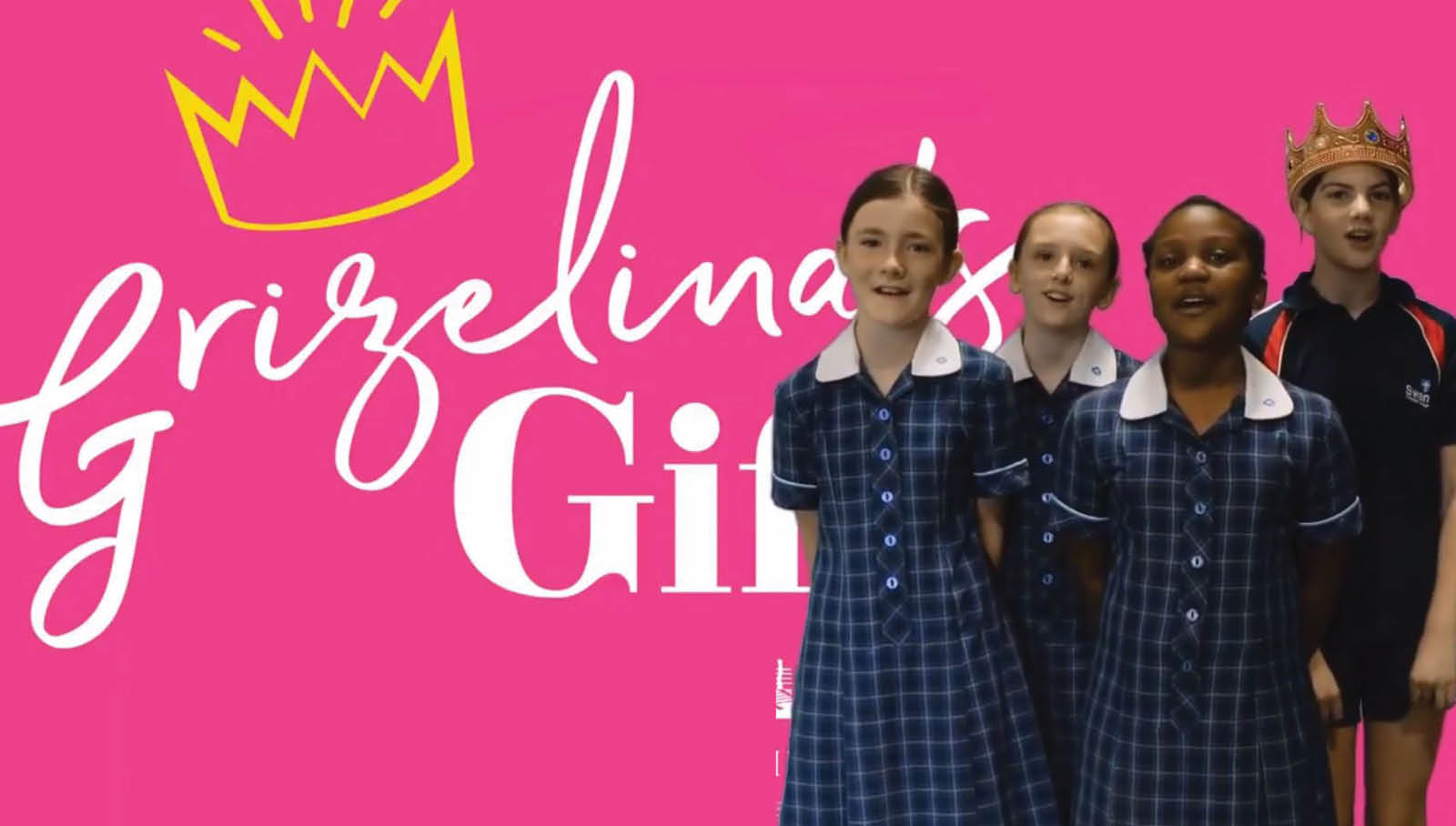 Grizelina’s Gift is a play about a kingdom struggling with drought and a desperate king who hopes that his daughter’s marriage may help them all. Suitors come from far and wide bringing gifts to impress Grizelina, but none appear to do that. Her maids and servants believe she just likes opening presents. The kingdom is fast running out of food and although Prince Cornell tries to share a wonderous gift, Princess Grizelina is unimpressed. 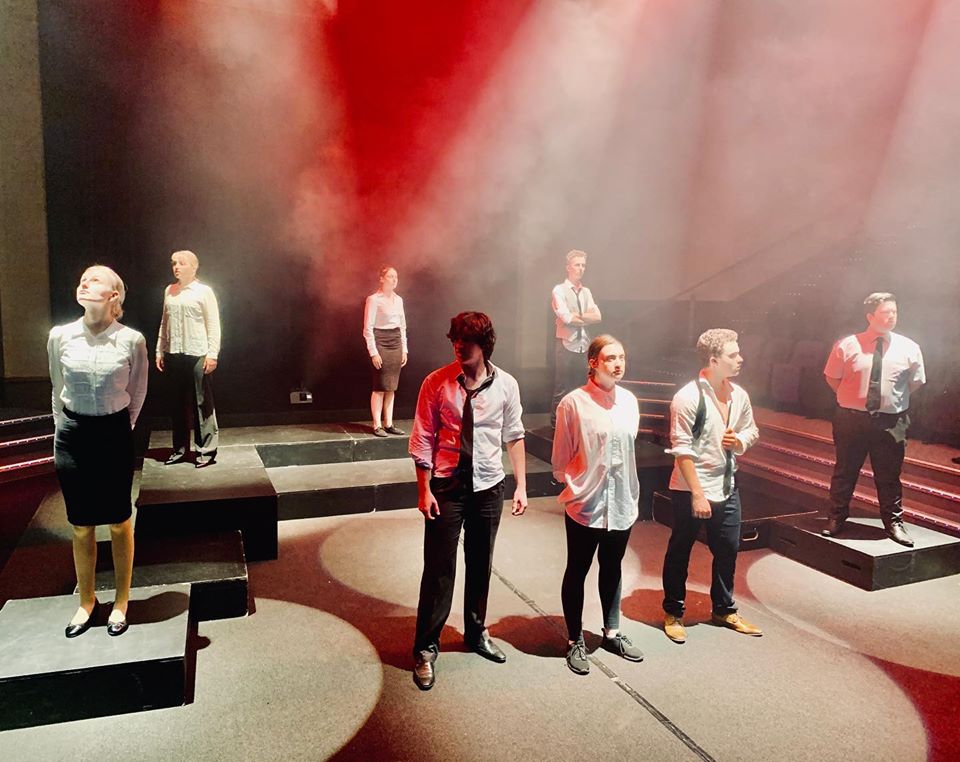 A contemporary reinterpretation of the classic text. Antigone must choose between doing what the state says or what her faith demands. This is fast, intense and compelling modern tragedy of a highly dysfunctional and damaged family. The performance is done by the Year 12 ATAR Drama students.

Clara’s on the Curtains is a comic farce that deals with all the hilarity of an armature community theatrical  club putting on a play.

The curtain is about to go up on the Women's Guild variety and dramatic show when one of the leads loses her voice.

This is the start of a series of calamities, not lessened by well meaning, but none the less embarrassing offers of help.

At the last moment all is well, and Clara even learns how to work the curtains.

The town of Middle Swan has been overrun with rats. They’ve come down from the hills, out of the reeds by the river, over the plains of valley and nestled in the middle of Middle Swan. They’ve eaten everything in sight, taken up residents in bedrooms and garages, classrooms and businesses. Churches and vineyards, stable and chook houses. They’ve move into cars, and family rooms, kitchen cupboards and factories, play pens and shopping malls.

The children of Middle Swan can’t stand it. There is nowhere to play, to study, to eat. They’ve watched the adults stand around and scratch their heads, arms moving, heads wobbling…but still the rats persist.

The oldest child in the town, sent a message to all around that they should meet in the park down the street and discuss the rats. The children came. There was much confusion and a little bit of fear, but a decision needed to be made to rid their town of this severe vermin.

While talking loudly, someone noticed a young person, watching them from a long way off.

They called them over to help if they could or finding a way to get rid of the rats.

The Piper was pleased to be welcomed in. Sure, enough they had a solution therein. A tale they told of the services she/he’d provided. 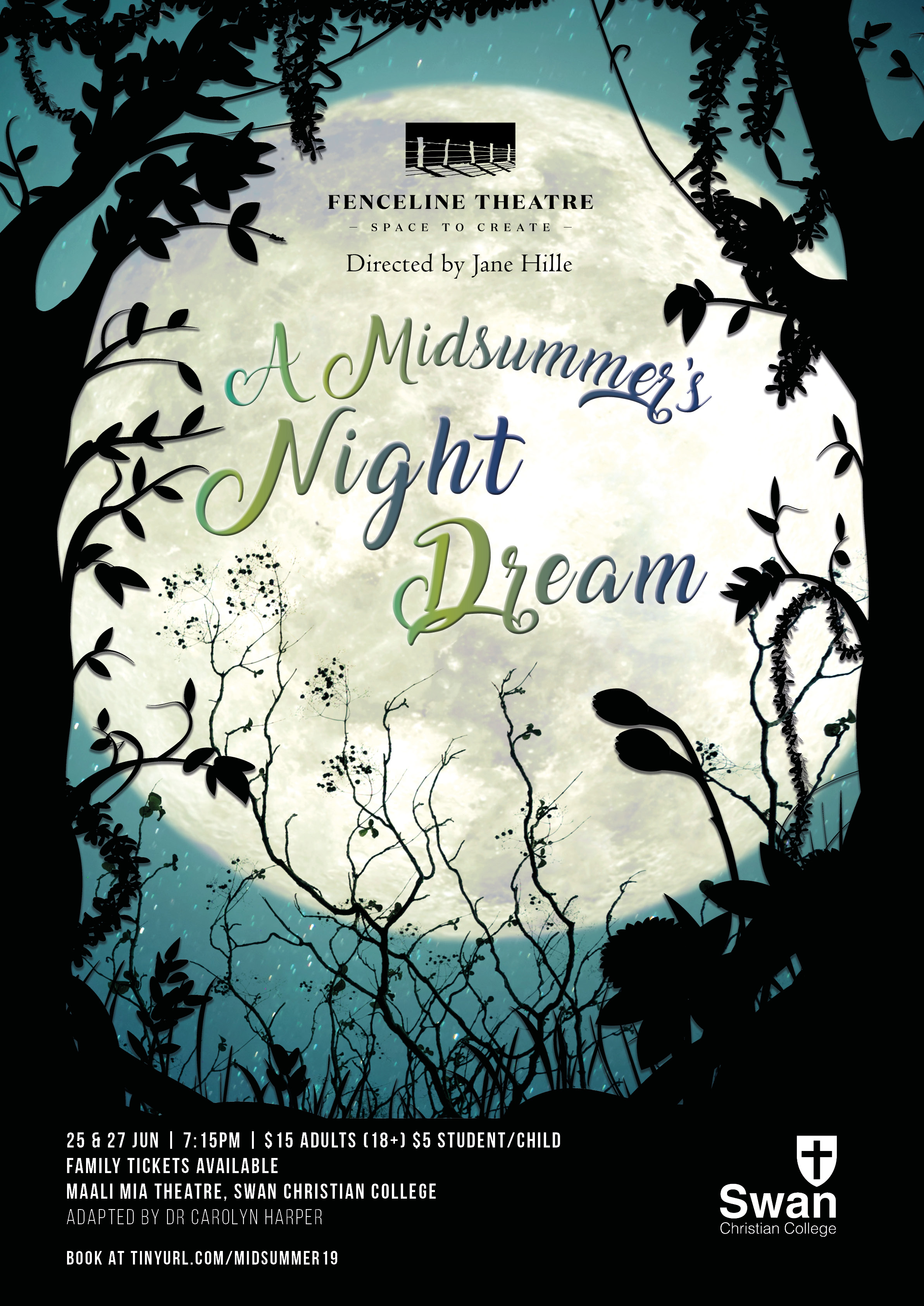 A modern, fresh and fun reinterpretation of the classic Shakespearean story of illusions, love and forest fairies, told in today's English. Directed by Jane Hille and adapted by Dr Carolyn Harper. 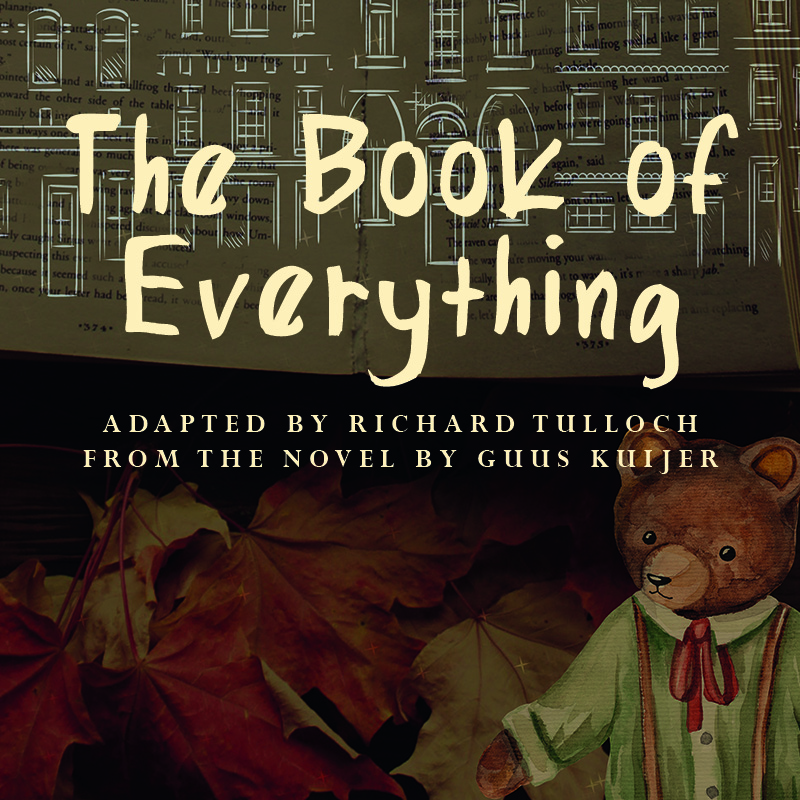 The Book of Everything by Australian playwright Richard Tulloch, based on Guus Kuijer‘s novel, was performed by Swan Christian College’s school-based theatre company Fenceline Theatre and directed by Jane Hille.

Swan Christian College alumni, staff and parents made up the cast of the production which was set in post-World War II Amsterdam and told the story of a family as seen through the eyes of Thomas, the young son.

The Year 5 and 6 students worked very hard on this play. This was an exciting family-friendly story about a fairy tale that gets all mixed up because a Dragon is thrown into the mix. We also had a wicked Queen from Snow White and her mirror who couldn't find their right rehearsal space.

What a great pleasure it was to work with so many talented students and staff. Major school productions require an army of people to bring them to fruition and Godspell has been no exception. This colourful musical production was defined by many things, not least of which is the magnificent sculpture designed and meticulously constructed by Mr Clive Smith. Reinterpreting Godspell for a contemporary audience set in the Swan Valley required a metonymic design that would symbolically represent who and where we are. Culturally and contextually relevant to our students and the wider community.

The show represented us, in a way, as Christians. It is the story of Jesus according to the Gospel of Matthew, the messages Jesus came to share with us all, albeit 2000 years ago. The audience got to see young people using their God-given gifts and talents to share what is essentially our core belief. 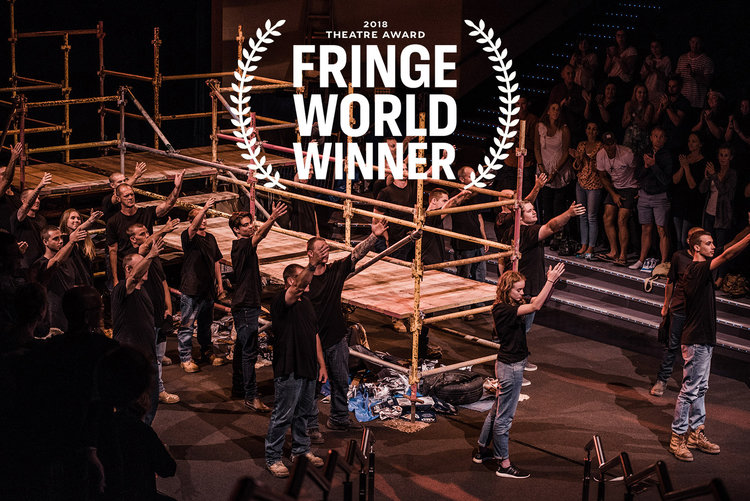 ANYMAN (produced by Fenceline Theatre in conjunction with Shalom House) dealt with the story of addiction from the perspective of men in rehabilitation – a topic that affects many in our community. It was announced the joint winner of the Fringe World Theatre Award and was very well received by the College community as well as the wider community.

“The Final Dress Rehearsal” was a funny little production about an amateur theatre group putting on a play and all is in uproar.

A classic Greek tragedy written by Sophocles in 441BC. The 2016 Year 12 drama class re-interpreted the text into a dystopian, post-apocalyptic time and place.

Friends of Fenceline Theatre is a group of parents, alumni, business supporters and theatre enthusiasts that generously supports the theatre company. This invaluable group of people provides front of house support for our productions, helps with set, prop and costume design, or simply helps us out financially.

If you are interested in supporting Fenceline Theatre (financially or by volunteering your time) please email fenceline@scea.wa.edu.au.

If you would like to find out more about the theatre company or would like to know how you can get involved, please fill in the contact form below or email fenceline@scea.wa.edu.au.