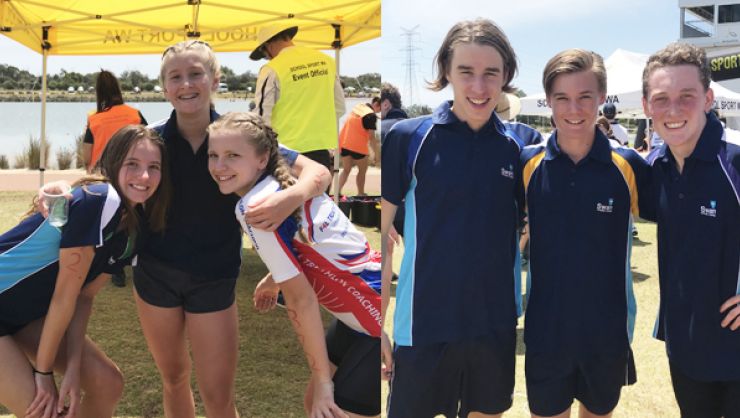 This year’s triathlon team was one of the strongest teams the College has ever taken to this annual event.

It was a beautiful day as Swan Christian College students arrived at champion lakes for the annual All Schools Triathlon. Students had the opportunity to compete in the 300m swim, 16km ride and 4km run course as part of a team or as an individual. With almost 1000 students from all over WA, the field was very competitive.

Clancy Quick cemented her national selection, placing Second in the State U15 Individual Triathlon. She was the fourth swimmer out of the water and moved up to Third Place by the end of the cycle (after hard months of training to improve her cycling). In the end, she passed one more person in the run to finish in Second Place.

The Year 9 girls U15 team consisting of Chloe Hayes, Clancy Quick and Cassandra Nugent came first in the state at the team event. Chloe was one of the first swimmers out of the water and Clancy rode the team into First Place. Cassandra then held her nerve and stayed out in front to bring home the gold medal.

Another outstanding achievement award goes to Paris Jose for coming Second in the All Ages Girls B – race. Although this race didn’t involve state selection, there were many strong athletes who were wearing their state representation singlets from previous years. Paris was one of the first swimmers out of the water. She then fell back a little in the bike ride, because she was quite new to this discipline. Once her feet hit the pavement and she started running, she overtook every other runner except for one to be awarded an amazing silver medal in her first ever triathlon.

The College came very close to achieving a Top Three Finish in the whole-school category. All students participated to the absolute best of their ability and handed on the baton to their teammates to finish the race. It was such a great day and all participants should be very proud of their efforts!