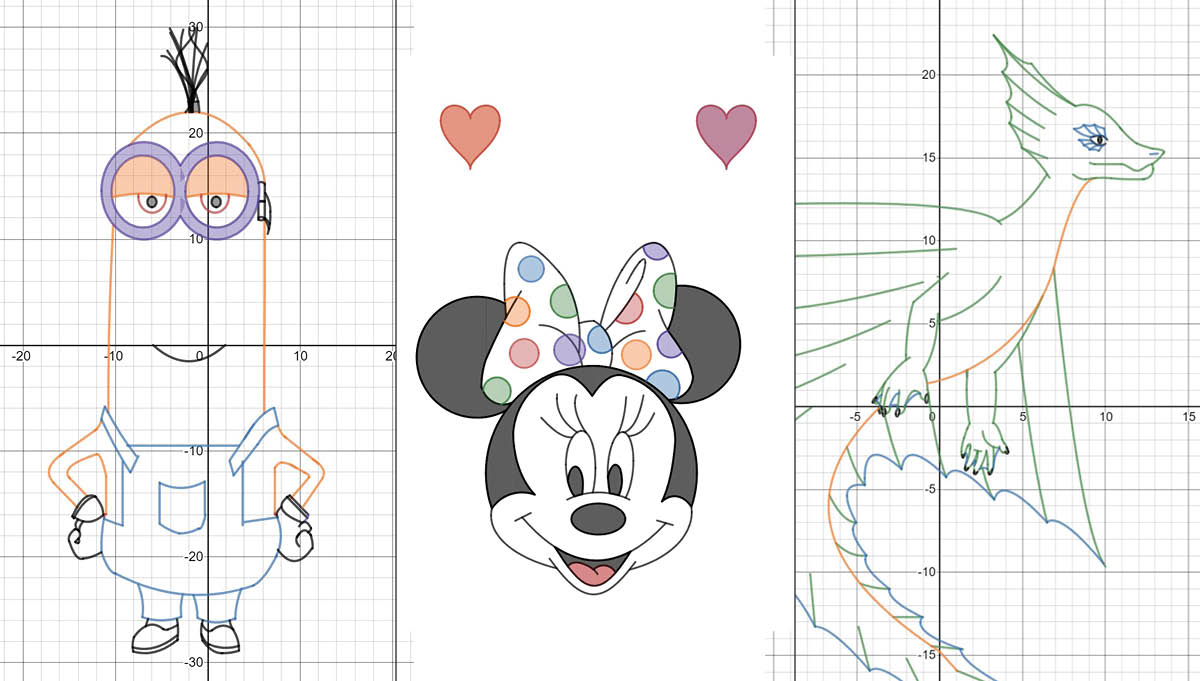 The Year 9 Advanced Mathematics students have been working on a Mathematics project using a software package called DESMOS, which is available online. The students had to reproduce a picture or cartoon character of their own choosing and replicate it using mathematical functions.

Students used their knowledge of linear and quadratic functions and developed their knowledge and experience with elliptical, circles, cubic, hyperbolic, trigonometric and root functions. By using a process of trial and error, changing the coefficients and constants in the functions, and limiting the domain over which the equations were graphed, students were able to produce some amazing replications of their chosen image. Some students even explored animating their image.

Students had to do a report in Powerpoint describing how they used the software and how they changed the values in their functions to draw their shapes.

These are a few outstanding examples of cartoons replicated using mathematical functions in DESMOS:

If you would like to learn more about this project, please have a look of some of the students’ power point presentations:

This is what our Year 9 Advanced Mathematics students said about the project:

“Our last Maths assessment was really fun. We had recently been learning about linear and quadratic equations. The project required us to use our knowledge of these and other forms and functions to create a picture on a Desmos graphing calculator. We could do anything we liked, and lots of us did cartoon characters. It was so much fun, trying to get our lines to match the picture we traced. We even animated some of our works using sliders, which was pretty awesome. I love that the mathematical equations we made could create images when put together. Maths and Visual Arts are two of the hardest subjects to combine, but this project did that perfectly!” - Ashleya E

“I found this Desmos project really interesting, even though my picture took a long time to make, it was still fun. At first, I found making my lines, shapes and equations really hard and time consuming but as soon as I got into the rhythm of it, I learned how to do it properly and faster. This project allowed me to explore the world of quadratics and linear equations. Instead of me just typing in numbers into equations, the power point taught me how each component in a shape influences the quadratic or line. An example is y=mx+c, this is an equation for a line and this project taught me that the m rotates the line at different angles. M is also the gradient known as rise/run. And the c in this equation moves the line up and down the y axis.” – Aryan P

“In Maths my teacher Mr Smilovitis assigned us a project. At first, I thought I was going to do badly in it, as I don’t always participate in Maths and it’s not something that I excel in. I started off this project pretty badly: the first day I was already bored of it and had only done one term of quadratics. I was struggling at first but then I found a picture that I grew really attached to. It was a picture of my favourite anime character and I got motivated to do it as I enjoyed working on it. I worked hard on trying to get the picture done in time so that I could say that I accomplished something I didn’t enjoy at first.  I don’t have the motivation to do things sometimes but this time, I did, as it was my favourite anime character and it was fun as I got to see all the progress and I wanted it to be perfect. I guess that’s why I wanted to do more and I ended up with around 240 terms which is 240 equations and I’m proud that I got that far as I usually have lots of issues with doing assignments like these.” – Georgia S