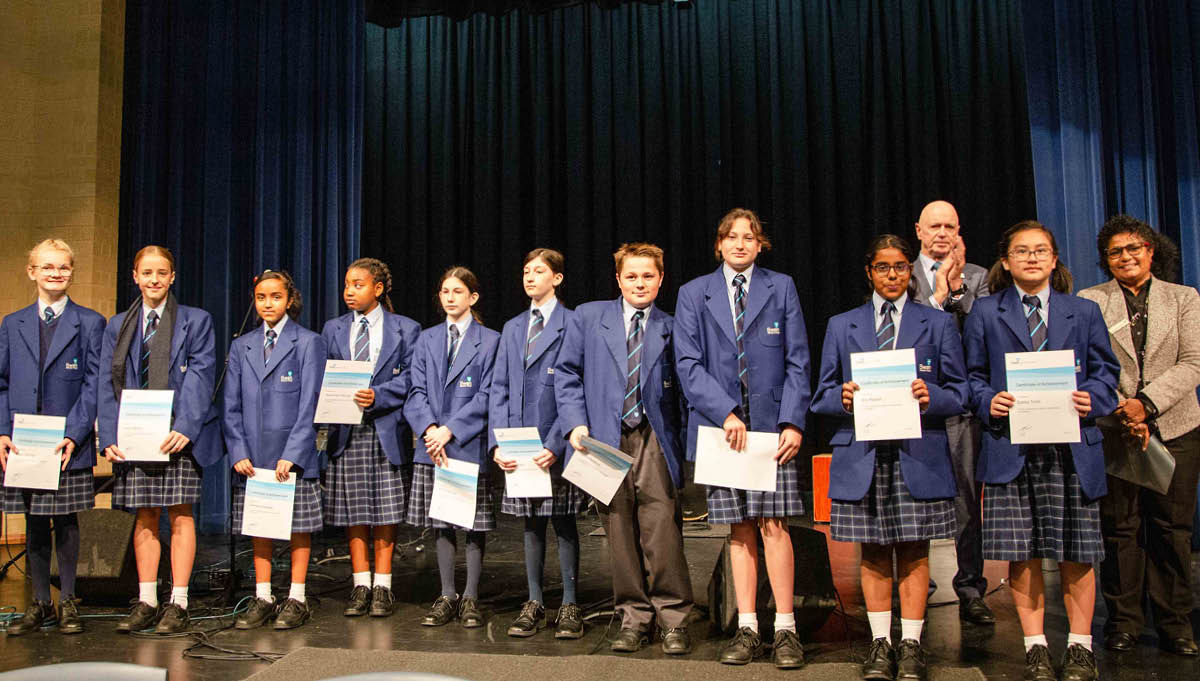 Recently we held our Celebration event for Middle School. Students in Years 7-9 were awarded for outstanding academic achievement.

There are two different sets of criteria for an award. Firstly, all round achievement is acknowledged. For those in Years 7 and 8 the criteria is five As in Maths, English, Science, HASS and Languages or four As and one B in their Semester 1 report. For Year 9 it is four As or three As and one B in MESH.

Last year we introduced awards for those who achieved 100% in a course as well. There was a significant increase in the number of prize winners in this section in 2020.

The event included musical interludes from our Middle School worship band and string ensemble, under the leadership of Andrew Raymond, and a morning tea with parents afterwards. Congratulations, once again to all the award winners.

“A trio of tales

I am going to tell you a trio of tales. They are from different times and places, ages, and nationalities. All the stories are true. Let’s begin.

I was born in 1879 in Germany, later moving to Switzerland. I was fascinated by Physics and was awarded my PhD by age 26. I wrote lots of ground-breaking papers – more than 300. I contested Newton, and others before me. Over time, my work moved from being viewed with scepticism, to being acclaimed. My curiosity was piqued by: general relativity, molecular motion, photons, cosmology and much more.

When Adolf Hitler came to power, I was in the US. As a Jew I decided to stay there and became a citizen, continuing my work at an even higher level. My formula E=Mc2 was famous by then. I wrote to the President warning him that Germany was developing a nuclear weapon – the knowledge to split atoms had been discovered.

I later regretted this decision because it led to the annihilation of Hiroshima and Nagasaki with atomic bombs, saying, ‘the unleashed power of the atom has changed everything save our mode of thinking and we thus drive forward towards unparalleled catastrophe.’ I pondered the meaning of knowledge, its moral fibre, the role of imagination, and wrote many articles about it.

I am, of course, Albert Einstein.

You were born in the Swat district of north-west Pakistan in 1997. Your father has set up a school because Pakistan has the second highest number of out of school children in the entire world.

Your life deteriorates as the Taliban take control of Swat. Television and music are banned, women are prevented from going shopping and the Taliban tell your father to close his school. Girls should not go to school. You begin writing a blog for the BBC as a form of protest. You do not dare to use your real name. Even so you and your father receive death threats, and soon it is revealed that you are the author of the blog.

You receive major awards. In response to your rising popularity and recognition, Taliban leaders vote to kill you.

As you and your friends are travelling home from school one day, a masked gunman enters your bus and asks for you by name. You are shot with a single bullet, which goes through your head, neck and shoulder. You nearly die but are airlifted to a UK hospital that specialises in military injuries. You remain in hospital for two months.

You and your dad set up a fund to raise money and awareness for girls’ education. Many girls in the world cannot attend school. You demand that this must change. You know that with education comes social, political and economic power.

In honour of your work you are awarded the Nobel Prize in 2014. You are just 17 - the youngest recipient of the award. You donate your entire prize of $500,000 to girls education. You know that education, knowledge, is important for everyone.

Your name is Malala. (https://www.malala.org/malalas-story)

He was born over 2000 years ago in a poor part of Palestine, and was about 33 when he died. He performed miracles, healed the sick, raised the dead. When he taught others he always taught in relationship – over a meal, alongside people as they travelled together, in public and private spaces.

He despised those who had great knowledge – the Pharisees and Sadducees but who had no heart for people. He despised their laws and rituals issued without compassion. He despised their lack of love, their hypocrisy, their inability to recognise new knowledge. Others in the community commented on the authority with which he spoke, of his great command of the scriptures, of his deep concern for others, of his ability to transform the lives of the weak, oppressed and sin-ridden. And the latter is all of us.

The knowledge leaders could not stand that their ideas were challenged, and so they killed him, crucified him like a common criminal, not knowing that in doing so they were fulfilling God’s plan for all humankind. Not knowing that he is the son of God, not knowing that ‘in him all things on heaven and earth hold together’. These scholars, did not understand, ‘in Him... are all the treasures of wisdom and knowledge.’ More importantly, not knowing that knowledge is a person; that relationship with him, is true knowledge.

He is Jesus, Lord and Saviour.

As I stand here, honoured and humbled by your achievements today, Middle School, I challenge you to reflect upon the spiritual, ethical and moral dimensions of knowledge.

Whose story from the trio resonates best with your own?

And how are you challenged by the concept that true knowledge is a person and, relationship with Jesus?

Congratulations. Thank you for your diligence. Parents, thank you again for your support, and entrusting us with your children. May they use their knowledge to change the world, to serve others and to serve God.”