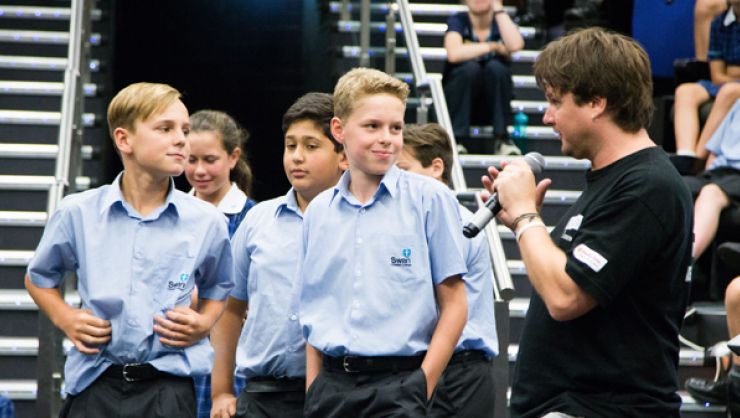 As a part of the Service Learning Program at Swan Christian College our Year 7 student participated in workshops and presentations by the Salvation Army.

The sessions helped the students to diffuse some of the myths around homelessness and encouraged the students to empathise with the struggles that many in our country face. One of the staggering statistics was that 17 % of the homeless in Australia are under 12 years old.

Our students participated in a simulation game where they each started with a quality of money, and during the exercise they either moved up or down the socio-economic scale based on circumstances that were largely beyond their control. This demonstrated how one’s fortunes can quickly change. Some of the students, who were designated as homeless, also had to make decisions about how they would spend their last $50 and where they would choose to sleep from a selection of undesirable options. They were then shown the implications of these choices on their health, security, hygiene, employability, security and mental wellbeing.

Youth Coordinator Darren spoke about how the Salvation Army uses services such as their soup vans to build relationships with those on the street and encourage them to make use of their other programs such as Bridge House where they learn cooking and financial management skills, and the Harry Hunter Centre where they can go for drug rehabilitation.

The sessions were insightful and inspirational and motivated students to make a difference. Over the next two months the Year 7 students are being encouraged to collect items which can be donated to the homeless as a part of the Salvation Army’s Winter Appeal. They can also join the Super Soupers which cooks soup for the homeless every month, or they can participate in the Sleepout for the Homeless in September to raise money for the Salvos, and find out what it is like to sleep out on a cold night.

It was fun to do the activity in the conference room, but also sad to hear about the homelessness in Australia. I learnt that there are more homeless people in Australia than I thought there was were, and it has made me more willing to help wherever I can.  Chloe Kemp

For more information about the Service Learning programs offered at Swan Christian College please contact me on 9374 8300.