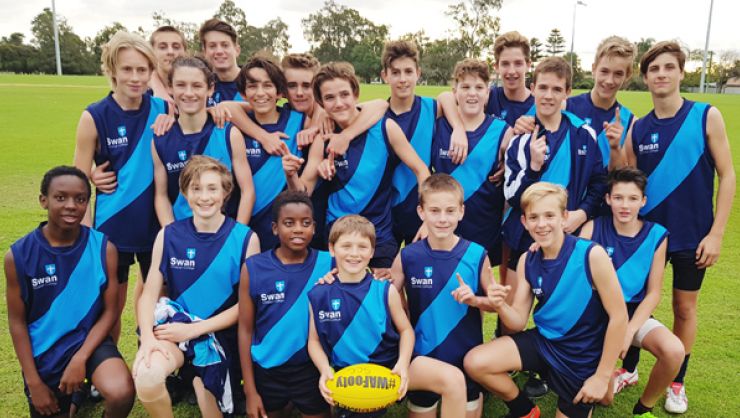 The College would like to congratulate the Year 7-9 boys football (AFL) team on their excellent achievements last term.

The team won Division C of the Eagles Cup, an inter-school ‘home and away’ style competition that involves preliminary games on Thursday afternoons against local schools. The Eagles Cup is the first step towards competing in inter-divisional finals against schools a little further away.

A high number of students registered for the team this year, creating healthy competition for spots in the team each week. The students cruised through the preliminary matches, winning most games comfortably against schools such as Swan Valley Anglican Community School (twice), Governor Stirling Senior High School (twice) and Darling Range Sports College (once). This earned them the right to host a semi-final match against Lumen Christi Catholic College. Once again, the team played very well and was rarely challenged on the way to a solid win and a spot in the Grand Final.

The Grand Final was an away-game against Lynwood Senior High School on a cold and overcast afternoon. Being the Grand Final, goals were not as easy to come by, but the team continued to play superbly and came away with a four-goal victory.

All students who played throughout the season are to be commended; not only for their successes but for the way they conducted themselves in all the games. Congratulations boys!