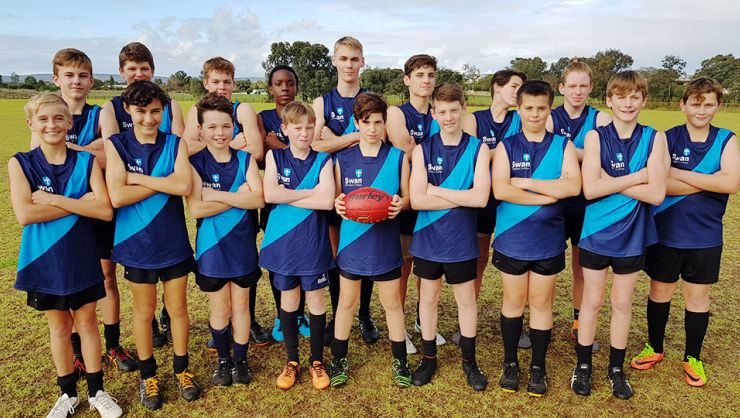 As one of the youngest teams in the Eagles Schoolboys Cup, our Year 7-9 AFL team had to face a challenging season this year, but Mr Faed (coach) could not have been prouder of the way the boys played in each game.

After a very successful 2017 when the Swan Christian College Year 7-9 Eagles Schoolboys Cup team was undefeated and won the division title, hopes were high for another positive season. This year, with a number of the team’s best players from last year moving on to Year 10, the same heights of success, unfortunately, could not be reached, but the boys were competitive in all their games and always played in the right spirit, which was pleasing to see.

Five scheduled matches were initially included in the regular season, however, one of the schools withdrew from the competition early on and the season was reduced to four matches, plus finals. The boys were able to win one of those four matches (against Darling Range Sports College).

The team was superbly led by a trio of star Year 9 boys Joel, Will and Michael, who regularly dominated the opposition midfielders and gave us first use of the ball at stoppages and ball-ups.

We thank all the Year 9s who played in the team this year for their commitment and leadership and look forward to seeing them develop their skills over the coming years.

For the Year 7s and 8s, the short school season is over for another year but we’re already looking forward to 2019 and hopefully seeing most, if not all, of those boys back in the team and proudly representing Swan Christian College.