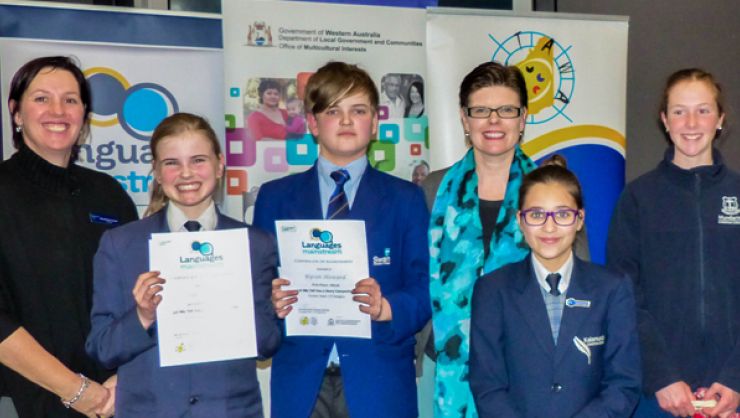 The MLTAWA has partnered with the State Government to hold Languages Week 2017, which is an awareness raising strategy to value the rich language diversity in Western Australian society and to acknowledge and celebrate the learning and teaching of a language other than English.

Additionally, two SCEA students, Byron Howard of Swan Christian College (Year 8) and Isla Howard of Kalamunda Christian School (Year 6) both won awards in their Year Group for submitting a video of themselves conversing in Finnish, for the Side-By-Side competition, which is one of four competitions run by MLTAWA.

AISWA Consultant for Languages and President of MLTAWA, Kate Reitzenstein spoke on the evening and called the ability to communicate in another language a critical 21st Century skill.

“Holding a conversation in another language can be challenging but can be incredibly rewarding as it allows you to connect to the wider world”, she said.

“A bilingual capability is the norm in most parts of the world”, said Ms Reitzenstein, quoting the Western Australian Languages Curriculum.

The Hon. Donna Faragher MLC also spoke on the evening, saying that the study of languages and the ability to communicate across cultures is an increasingly powerful tool.

“It might expand opportunities in places they never thought possible”, she said.

Kalamunda Christian School had two of their Year 6 students perform a clapping song in Japanese, and another Year 6 student perform "Il Mi Faro" in Italian.

Swan Christian College had two Year 5 students perform on the night, one singing "Edelweiss" in German, and the other "I Know Who Holds Tomorrow" in Burmese.

The Hon. Ms Faragher added that the usefulness of languages is continuing to expand, and encouraged the many language teachers and educators in attendance.

“There are more than 270 languages spoken in our state. It is so important we continue to encourage languages in our schools.

“Every day you are opening students up to a world of opportunity”, she said.