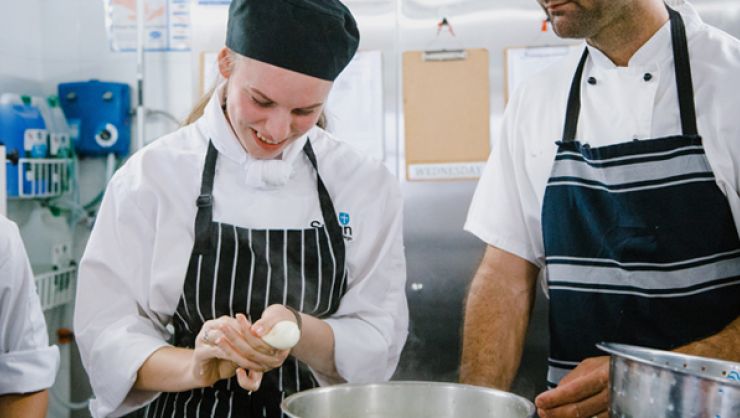 The Year 11 Hospitality trainees, accompanied by Mrs Cardillo-Rawlins and Chef Rob Do Carmo, enjoyed an excursion to the Cheese Barrel in the Swan Valley.

Since cheese is used in a variety of dishes that trainees prepare for the Swan Café and other catering functions, it was appropriate to learn first-hand about the different varieties around the world and about how cheese can be used to enrich a dish.

They were able to taste a variety of cheeses: a mild blue vein made in Margaret River, gouda from the Netherlands and Emmental from Switzerland. A hard yellow cheddar cheese from France and creamy brie from New Zealand were among the favourites.

It was interesting to learn about the process involved in making blue vein cheese and other matured cheeses. Some trainees did not like the idea that the dark blue veins inside the cheese were in fact mould.  They felt more at ease when it was explained that the mould penicillium is not toxic and safe for human consumption.

After the excursion, Chef Do Carmo graciously organised a cheese-making Master Class. Trainees learned how to make mozzarella cheese and the processes involved. They had the opportunity to stretch and shape the mozzarella out of the curd.

After the cheese-making experience, trainees had a new appreciation of the cheese industry and the processes involved. They also realised why some varieties of cheese are expensive as a large quantity of milk is used to extract a small amount of cheese. The period of time it takes for cheese to mature is also a price factor.

Overall, the trainees were delighted with the experience and as a result, most will go home and make their own mozzarella cheese.