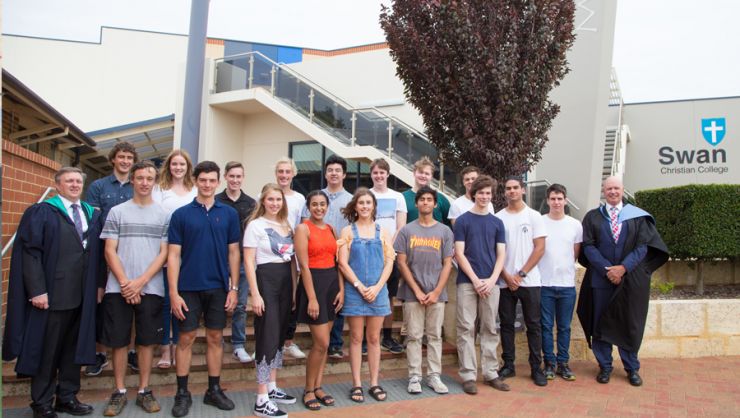 The Principal and the College Executive Team would like to congratulate our graduates on their academic achievements and excellent conduct.

As a leading coeducational school in Perth’s eastern suburbs, the College is delighted by the achievements of our ATAR students, and those who gained nationally recognised qualifications under the Australian Qualifications Framework (AQF).

Some of the individual successes included Matthew Chidlow who gained an ATAR of 99.45, Conrad Matthews who achieved 98.45 and Liam Minotti who gained a rank of 97.9.

In 2017 the median ATAR achieved by Swan students was 81.85, with 18 students being inducted into the Excelsior Club having achieved a minimum ATAR of 90.  This was an improvement of 1.85 ranking points on the previous year and equated well with the state mean of 77.5.   Six students received a WACE Certificate of Distinction that requires students to achieve A grades across their courses and/or certificates, a testament to their commitment to their studies.  In addition, 14 students received a Certificate of Merit.  79% percent of students who applied for university entry received an offer for their first preference compared to the state average of 68%.

At 96.5% Swan Christian College’s WACE was again higher than the state average.  The College’s graduates received a total of 188 AQF qualifications with many students achieving multiple qualifications.

Well done to the students below who were awarded the prestigious EXCELSIOR MEDALLION, for an ATAR of 90 and over.

We would like to join our students in thanking their parents and guardians for their ongoing support and acknowledge our hard-working teachers who have also strived to assist all our students to reach their goals.