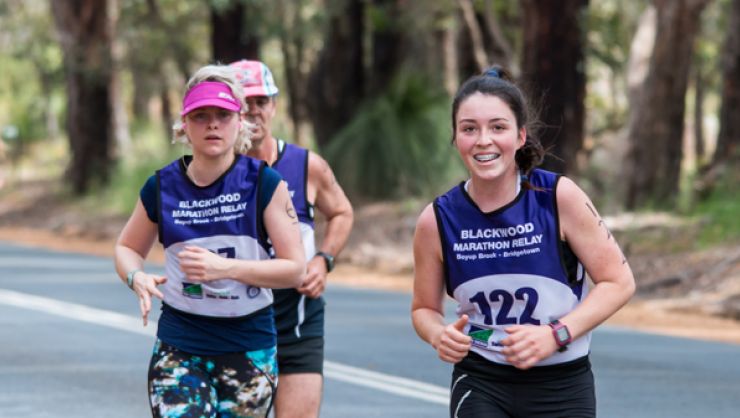 It was a cold and windy day as 13 students and five teachers left the College to race in the Blackwood Relay Marathon.

Not every team was required to have a horse rider, so the race was split into two categories – equestrian and non-equestrian. When we arrived on Friday afternoon, all the swimmers and kayakers had an opportunity to scout their part of the river in order to double check for any obstacles (of which there were plenty!).

The race day came, and the three student teams and two teacher-teams sent their runners to Boyup Brook to start the arduous 11.5km run. The gun went off.

Ex-Swan Head Boy and current state champion Dean Menzies shot out to an early lead for the teacher/ex-student team, eventually finishing the 11.5km run in First Place with a personal best time of 37 minutes and 30 seconds. Jonty Lambourne was the first of the Swan students to finish the run with a solid time of 52 minutes and 23 seconds. Mark Schorer put the Swan teachers/parents team in a strong position with a run time of 57 minutes and 17 seconds. Madison Streeton put her team in First Place for the school’s division with an excellent time of 1 hour, 1 minute and 36 seconds. Anneke Deboer kept her U18 team in the hunt for a medal, finishing her run in an excellent time of 1 hour, 8 minutes and 52 seconds. Then it was the kayaker’s turn.

With Dean Menzies giving his team a 3-minute lead over everyone else in the competition, Mr Dallin had time to stop halfway for a cheeky ice-cream and coffee, still keeping his team in the lead by over 2 minutes at the end of the kayak, with a near personal best time of 42 minutes and 33 seconds. Max Smith was close at his heels with a personal best time of 43 minutes and 21 seconds (every year he is getting closer to beating Mr Dallin). Max’s time was the 4th fastest out of all the adults.

Mr Smith, Max’s dad, put in a strong kayak time of 58 minutes and 2 seconds to keep his team in second place in the Vets category. River Armenti, a state-level kayaker from Mercedes college, received the bib from Anneke Deboer to put her team within striking distance of the Top 3 in U18’s open category with a time of 55 minutes and 7 seconds. Alexandra Knight showed great courage to kayak for her team for the first time in very tough, rocky conditions; receiving the bib from Madison Streeton and finishing in a time of 1 hour, 17 minutes and 55 seconds to keep her team close to first place in the school’s division.

It was then up to the swimmers. The teacher team had a solid swim of 13 and a half minutes to keep them in First Place overall. The teacher/parent team had an amazing swim from Mr Twine who finished the 1km swim in a time of 12 minutes and 33 seconds to propel his vets team into Second Place. Kelsey Eastwood had a PHENOMENAL swim of 10 minutes and 27 seconds (only 5 seconds behind the winning adult swimmer!) to bring her U18 team into Third Place. Tegan Kata, a Year 8 girl, put in a massively brave effort to finish the 1km swim in an outstanding time of 17 minutes and 26 seconds. What a legend! Zach Arblaster stayed warm within his wetsuit and kept his team in contention for First Place with a solid swim time of 16 minutes and 48 seconds.

Now it was up to the horse riders and the bike riders to bring it home - and this is exactly what Nerida Evans and her horse did for her team. Nerida’s time of 36 minutes and 36 seconds was one of the top ten horse ride times of the day. For Mr Dallin’s team, tragedy struck when their bike rider didn’t turn up. However, a kid from Bridgetown who was helping marshal the event filled in for them and rode the best he could to get our team to Third Place overall. What an amazing effort!

Mark Schorer was an absolute champion to ride for the teacher/parent team after having already done the run earlier in the day. His amazing time of 47 minutes and 7 seconds kept their team in Second Place overall for the vets category. Brianna Hillen rode for her very first Blackwood Marathon in an excellent time of 1 hour, 1 minute and 19 seconds and brought home the win in the school’s division for her team - ‘122 Banana Boat Crew'. This excellent time is probably due to the fact that she lives in the hills, and she had done some excellent training up and down the hills of the darling scarp in preparation for this event.

Amber Stanicich also rode like an absolute champion in her first ever Blackwood Marathon in a time of 1 hour, 3 minutes and 8 seconds to bring home Third Place for her team – ‘121 Cinnamon Buns’. Spencer Lambert, our champion Luke Durbridge scholarship winner and state-level rider, finished his ride in an amazing time of 40 minutes and 27 seconds, the 8th fastest time out of all the adults, to bring his team ‘Go Vegan’ into First Place for the second year in a row in the non-equestrian open division. What a result! This has to be the best result any Swan Christian College team has ever accomplished at the Blackwood Marathon.

After the race, we all went to the emporium bistro for the traditional milkshakes and chips, then dropped past the lolly shop to get a large amount of lollies to use as currency in a card game. The memories from this event will last forever and these students and teachers have made Swan Christian College so proud!

Thank you to Mrs Rebecca Coleman for capturing the event in pictures. 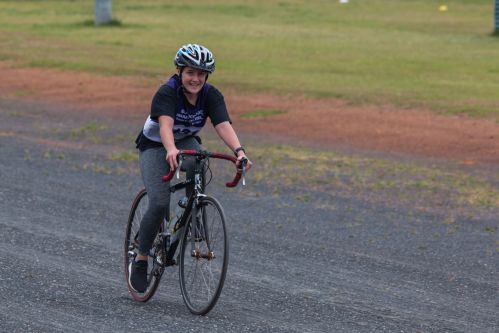 Photos by Rebecca Coleman and family