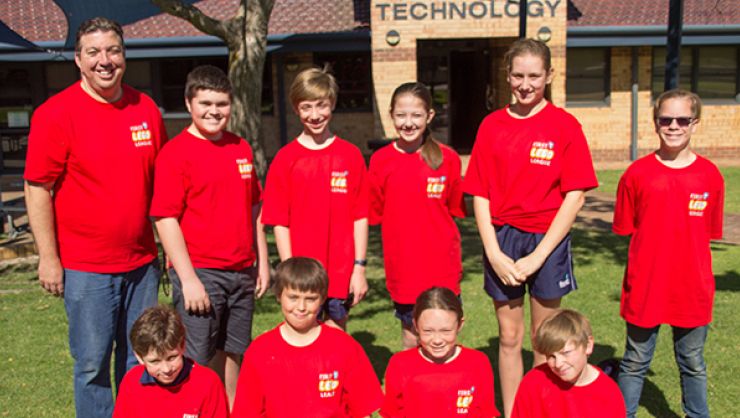 The First Lego League afternoon club competed with great success at a regional competition at St Stephen’s School in Carramar.

The club has run on Thursday afternoons and enabled students in Years 6 - 8 to participate in a competition using Lego, coding and robotics.

The students loved the experience of competing against other schools and it was great to see parents support and encourage the students. Overall, our teams participated well in all of the events and we won the top Programming Award for the competition. We look forward to participating next year.

The competition is run in many schools around the World with over 32,600 teams of 350,000+ students from nearly 80 countries. Students have learnt about a modern problem in science and engineering and developed solutions. The competition is designed to encourage and develop students’ imaginative thinking and teamwork. The students were guided by teachers and parents to research real-world problems and were challenged to develop creative solutions for the problems they have identified.

This year, the theme of the Lego League has been water and how we can improve the way people find, transport, use, or dispose of water. The students, parents and staff involved in the club found it challenging and rewarding.

Joshua Mitchell was one of the students who participated in the tournament and mentioned the following:

“The First League was a great experience, which was frustrating and exciting at the same time. I had a lot of fun programming and I also learned to work with my teammates to finish various challenges set. On the day of the tournament, we needed to have our robot design and programs we had written were judged. I had a feeling of excitement and nervousness, but when I heard the judges talking to each other about the use of sensors and blocks that I had created, I felt that we might have a chance of winning the award. Later in the day when the awards were announced and it was time for the programming award, the announcer said our team name and I was so excited and I knew that all our hard work had paid off.”

Empty shelves, empty buildings and empty streets. A pandemic cripples countries around the world but resets our values.