Learning from our Elderly 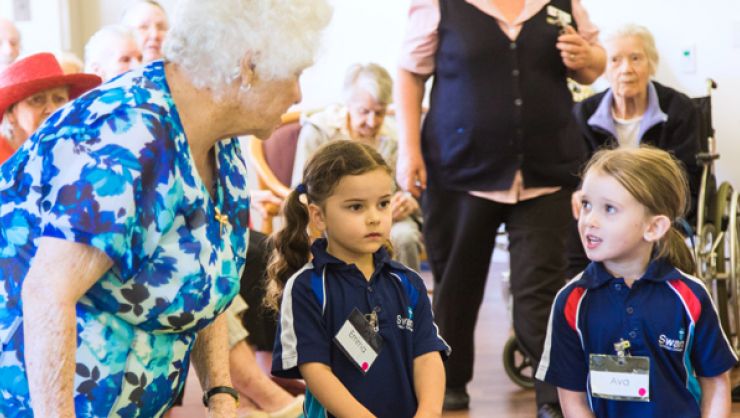 Over the past few weeks more than 100 of our students from Kindergarten and Year 6 were blessed to interact with the residents of Regis Aged Care facility in Greenmount.

These visits are a part of the College Service Learning Program, which seeks to expose our students to activities that enable them to serve the world around them. The students are also enriched through developing their understanding of people, their struggles, and the contribution they have made to society.

Our Kindergarten students brought smiles all round to the elderly residents when they greeted them with floral arrangements and planted porcelain tiles they had made. They entertained them with singing and playing with a parachute. One of the elderly residents, “Nanna Thema”, as she told the children, gathered the children around and read them a book about a little red chicken. The students were totally engaged as she reminisced about her life growing up as a little girl on a farm.

Our Year 6 students went to Regis in three class groups over a three-week period. Their task was to interview the residents about their life stories and what their careers were like in the old days? These stories were then to be contrasted with careers today, and for the students to consider the impact of technology on career choices.

Below are some comments from students who attended the excursion.

I think that traveling to Regis and meeting the people there was a great experience.

I think that we can learn a lot about people if we just sit down and talk with open hearts and not be afraid to say things that might embarrass. I think we need to learn about past generations to help us decide our future. Thank you again. - Jasmin

Thanks so much for taking us to Regis Aged Care facility. I really liked going, and talking to Chris, Jack and Grace. I really recommend letting future Year 6s on the excursion. I learned a lot about what happened to people that were affected by the war, and the kinds of technology and gadgets. - Grace

Today was extremely enjoyable, I learned all types of things from that generation. It was fun speaking to Raymond, I feel like he had a few good laughs too. I learned about his past jobs which were farming, teaching football, and he was an insurance assessor. He was born in 1939 when a war started. I also learned that he owned a hotel and then it burnt down so he bought the one next to it. - Ashlyn

The excursions to Regis were a great success and brought incredible joy to the elderly and the students who participated. Many thanks to the parents and staff who escorted students to the excursion, and to Regis Greenmount for hosting our College. For more information about Service Learning at Swan Christian College please email Raymond.hockley@scea.wa.edu.au.