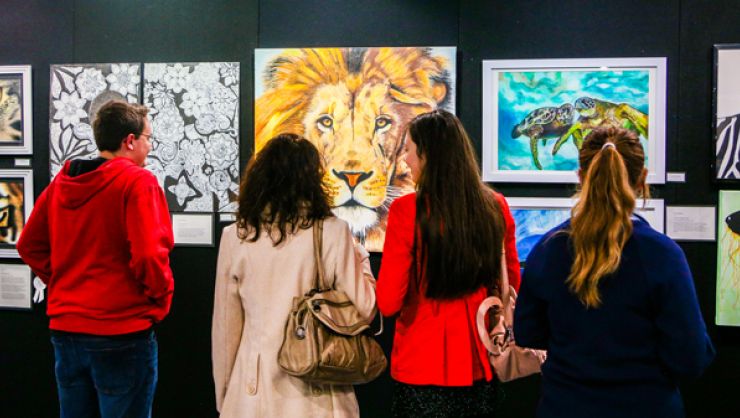 The Media and Visual Art Exhibition opened last Monday evening to one of the largest crowds we have had at a College Arts event.

This was so encouraging to both students and staff. The exhibition featured work from Junior, Middle and Senior School students including drawings and paintings, sculptures, textiles and mixed media work. Awards, including the Principal’s Awards chosen by Mr Scott himself, were presented while Hospitality students served canapés and drinks in the foyer to attendees.

In the Media room, guests were able to watch Year 11 Media Production and Analysis student music videos and later in the Maali Mia theatre, the Year 12 students presented the Art Films they created this year.

At the end of the evening, guests voted for their favourite artwork and film, and the People’s Choice awards were presented to the most popular works. Congratulations to Eli Foster and Hannah Bisset for winning Best Film, and Spiro Williams for Best Artwork, which was the drawing of the lion featured on the Exhibition poster.

Thank you to all the teachers and staff who contributed towards the event.

If anyone wishes to purchase an artwork from the exhibition, they should contact the visual art teachers directly, who can pass the expression of interest onto the student.

Thank you to all those who supported the exhibition opening, and gave such wonderful feedback.